The Many Types of Types

Julia programmers love nothing like a good polysemy. One of the more extreme examples is the community’s use of the word “type”, which refers to a cluster of related, but subtly distinct, features and their roles in the language. Ambiguity can provide a useful shorthand, but it can also be confusing to newcomers and those outside the community, so it might be useful to disambiguate a bit.

In short, types are Julia values that can play in one of the following parts: as tags for identifying meaning, selectors for dynamic dispatch, descriptions of data layout, annotations provided by type inference, hints for compiler specialisation, and constraints for compile-time correctness checking. These are all largely separate concerns that aren’t as tied together as they may seem.

The most important use of types is to tell us what kind of data we have. If we have a pair of numbers it’s important to know whether it represents “an (x, y) cartesian coordinate” or “total assets and liabilities for a balance sheet”, which should probably be treated very differently. The original and simplest way to do this is by naming our variables carefully:

This can get unwieldy when we have lots of data flowing through a system, though. It’s easy to lose track of what everything represents, and accidentally mix pounds with kilos, resulting in bugs. Instead, we can associate the raw value with a name that tells us what it’s for:

In dynamic languages we have access not just to the value weight.value == 10.0 but also to the name typeof(weight) == Kilograms, which I’ll call the tag. In more common OO languages the tag is provided by the class. While our program runs we can look at the tag and choose appropriate behaviour. Most languages provide shortcuts for this pattern, which brings us to –

To bring meaning to our programs we usually want not just plain information, but a set of verbs we can use on it, like adding two numbers or writing to a file handle. Verbs are only applicable to some things (you can’t write bytes into a cartesian coordinate) and may behave differently in different contexts (writing bytes requires quite a different skillset to writing calligraphy). So almost all languages have some notion of dispatch that routes a high-level verb to the right implementation.

File and Socket might have the same underlying representation (a pointer), and writing bytes to them is conceptually the same. But carrying out the operation might be quite different; in that case when you write write(io, bytes), Julia can check what io is and go to the right implementation.1 Dispatch involves a surprising amount of machinery: the notions of subtyping (which dispatch selector matches which data tags) and specificity (which selector should take priority if multiple match, like CSS selectors) are some of the hairier parts of the whole system.

Note that although the notation f(::T) = ... resembles standard function argument types, it has a completely different meaning to most languages, which refer to compile-time types rather than runtime tags. It is arguably closer to pattern matching (with only the tag available for destructuring).

If we only cared about what our programs did – arguing semantics, if you will – we could stop there. If we care about performance and what our programs do under the hood, Julia’s types have a bit more to say. Say we define a complex number type:

We know this creates a tag, a constructor that creates objects with that tag from two floats, and a selector which matches those objects. But it also defines a composite data type made of two floating point values, associated with the tag. This is important because we (and Julia) can predict how an object will be represented in memory from the tag – heap memory layout doesn’t depend on type inference. For example, the size of this object in bytes is sizeof(Complex) == 16. This feels fairly obvious, especially given the resemblance to C structs, but certainly isn’t inevitable.

Julia’s performance depends heavily on its type inference. Inference is the only thing close to a type system in the formal programming-language-theorist’s sense2 – a way of statically working out of the sort of values that a program can produce. Normally, you’d use this to check for correctness. Julia uses it for performance. If we know a variable will always be a complex number, we can avoid the rigmarole of checking its type tag and selecting the right method every time the code runs.

I want to emphasise the difference between (static) types and tags. If you have a function x = f() that returns an integer or a string at random, the inferred type might be x::Union{Int,String}. But typeof(x) won’t be Union{Int,String}; it will either be Int or String, because that’s the tag of the actual object that f() returned in that moment. The variable x is like a hole that we’re trying to put something into. It has to have the right shape, but it doesn’t have to have exactly the right shape, it just has to have space for whatever you might put in it. The static type of x is the shape of the hole, and the dynamic tag of x is the shape of whatever’s inside right now. These are very different concepts and, confusingly, Julia uses the same term for both.3 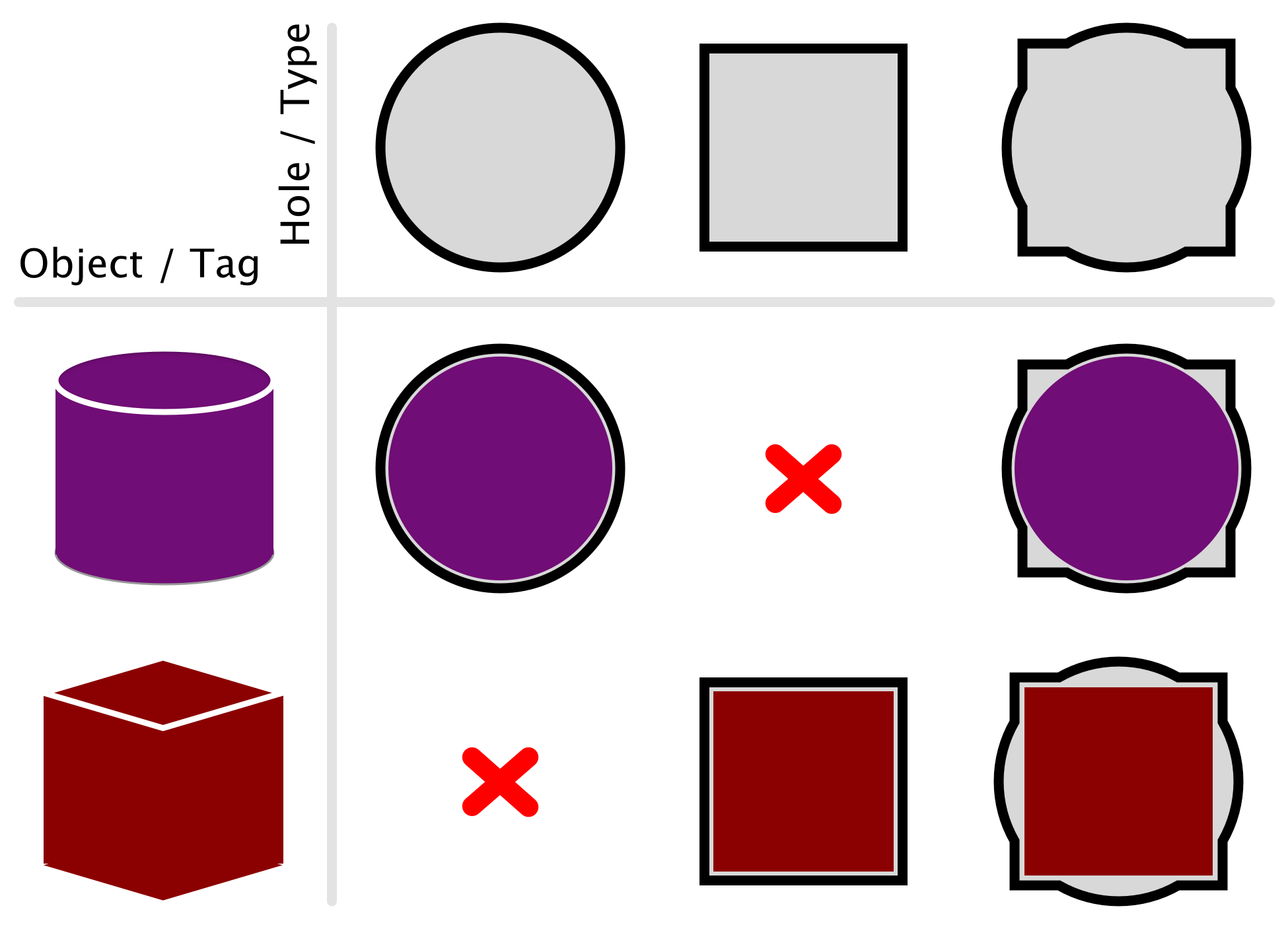 It’s also worth pointing out that the typeof(x) function is nonsensical from the PLT / static typing point of view. A given object can fit into any number of holes; and the number 1 fits the types Int64 (the set of all integers representable in a certain 64-bit format), or {1} (the set containing just the number 1, and nothing else), or “1:100 ∪ Heloderma suspectum” (either a number from one to a hundred, or a spitting lizard).

To some extent, this reflects how we use the word in language. We might ask about “type”, but to make the question meaningful we have to imply a set of possible answers. You’d ask “What type of animal is that?” or “What type of dog is that?”, but you won’t get far by pointing at someone’s Dachshund and shouting “What type is this!?” Moreover, while we see “type of dog” as sort-of dynamic (a property of the thing itself), we also say things like “he’s not my type” which are sort-of static (a property of the hole you’re putting it into).

Once we have type information, we can specialise, to avoid carrying around type tags and doing dispatch at runtime.

One thing I haven’t mentioned so far is type parameters, like Complex{Int}; these are key to telling Julia’s JIT what to specialise on and what work to leave to run time. Although they are superficially modelled on generics from static type systems, type parameters are really just fields that happen to get stored in the data tag. You can store an array size, for example, just as well in a normal field or in the tag, and semantically it gets carried around at runtime as usual. The difference is that Julia’s JIT will take it as a strong hint to specialise on that information: effectively assuming that it is constant, removing branches and dispatch that depend on it. In this way types (and particularly type parameters) have an important role in finessing Julia’s compiler.

Note that Julia conflates properties we want to dispatch on with those we want to specialise on. This is a common design decision that turns out to work well in practice, but again, it’s not inevitable.

An honourable mention for the one thing Julia doesn’t do, which probably has the strongest association with the word “type” in programming languages: static checking for correctness. Despite gleaning a wealth of information through its compiler analysis, Julia goes out of its way to avoid errors at compile time even if it can prove the code will throw up, in order to prevent compiler heuristics from affecting the behaviour of your code. This may become a role for Julia’s types in future.4

Having teased apart the role of types in Julia a little, here’s a little higher-level commentary.

In Julia we tend to describe objects like Complex{Int}, which are instances of Type, as types. But this is fraught. On their own, Types are just objects like any other. We can use the same Complex{Int} object in a bunch of different type-like ways (as a tag, as a dispatch selector, as a result of type inference etc), and indeed in some non-type-like-ways (as a constructor function, or by printing it). But some “types” are only used as dispatch selectors (there is no x for which typeof(x) == AbstractArray{T} where T<:Integer) and some are only used as compile time annotations (there is no x for which typeof(x) == Const(1)). In fact, some of Julia’s static type assignments (like Const) are not even Types! This definition of “type” is at best very Julia-specific, and doesn’t even cover its own use of types completely.

These issues are not unique to Julia. Every language I can think of tangles these ideas together in its own way. C’s struct primarily defines a fixed data layout, giving no dispatch options and creating no runtime-accessible objects. Java’s class gives no options for data layout; used as a type annotation, a class includes its sub-classes, allowing for dispatch and leaving it wide open what will be present at runtime. All C and Java’s definitions have in common is that they define a compile-time name that can be used for type checking, which is the one thing Julia’s struct doesn’t do.

Functional languages like ML and Haskell do dynamic dispatch very explicitly (by case-splitting of ADTs/enums) and sometimes have an entirely different mechanism for the static kind (modules or typeclasses). Ironically, the bolted-on TypeScript system is perhaps the cleanest one here: types used purely for compile-time checking with no impact on the runtime at all. If you want ADTs, just create the tags explicitly, SICP-style. Then where do CSS selectors, which only influence dispatch (of styling rules), fall?

I’m not really answering the question. But it seems that we either put up with the ambiguity, or we define “type” in such a narrow way that it captures neither the intuitive understanding of type, nor much of the interesting parts of how programming languages represent different bits of data – something of a dilemma. Perhaps “type” is an inherently fuzzy concept, and when we want to talk precisely we have to pick something concrete out of the cluster of ideas that come with it.

Hopefully, when you hear the word “type”, the ambiguity won’t pose too much of an issue. Just select the right meaning from the context.